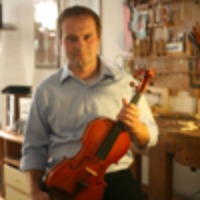 Federico Fiora was born in Cremona on May 10, 1972. He attended the International School of Violinmaking in Cremona (I.P.I.A.L.L.), graduating in June 1990, under the guidance of the teachers Ezio Scarpini and Stefano Conia.

After finishing the school he worked as apprentice in the transition C.E.E. luthier’s workshop, with Mr. Gio Batta Morassi, till 1993.

He opened his own luthier’s workshop in 1996 in Corso Matteotti 31 in Cremona, in 2000 he moved in Via Pallavicino 11-13 in Cremona, too, and since 2011 he has opened a storefront near the city centre.

He particularly gets inspired by traditional models of Cremonese school, like Antonio Stradivari, Guarneri del Gesù, Nicolò Amati and often uses the Amati’s design of the viola of 1615, preserved in the Stradivarian museum of Cremona.

He participated in “Concorso Baveno” in 1995. He won the second prize in the cello section, and the third prize in the viola section to “7th national competition of violinmaking ANLAI” of 2013.

He exhibited one of his violins in an expo organized by “Consorzio Liutai” in “Sala Decurioni” in the Townhall of Cremona.

In his luthier workshop formed some violinmakers, practicing placement after-school organized by I.P.I.A.L.L. of Cremona.

He often welcomes groups of tourists and school classes in his workshop, telling them about the history and the traditional Cremonese methods, collecting a lot of success.