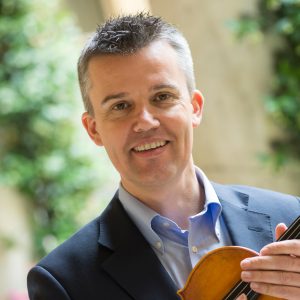 Edgar E. Russ was born in Austria in 1966. At a very young age he developed a strong passion for making musical instruments.

In 1984 he moved to Italy to attend the “Antonio Stradivari Violinmaking School” of Cremona. After four years under Maestro Bergonzi′ s supervision, he graduated in 1989.

To complete his professional training and his continual research in the field of acoustics, he decided to travel to the United States, where he worked in several workshops and furthered his knowledge beyond the traditional Cremonese method of violinmaking.

In 1990 Edgar Russ opened his first workshop in Cremona in Via Plasio 7. His instruments are played by world best known important musicians, professors and teachers in most prestigious orchestras, chamber music groups and quartets and have been used by soloists in CD recordings.

He is well known for his set up and sound adjustments. He participates annually in various important exhibitions and Music fairs including Tokyo Music Fair, Mondomusica in Cremona – Italy, Cremona Exhibitions in USA, Frankfurter Musikmesse in Germany and Music China in Shanghai.

He has been invited to present in numerous TV appearances for violinmaking demonstrations, locally in Italy (Rai), in USA (Fox, ABC and CNN). Edgar is the co-author of a book in German language entitled Die Violine-Instrument, Geschichte, Bau, written together with Thomas Oberhauser in 1994.

In 1995 he opened a workshop together with his friend and college Giorgio Grisales. After 10 years of collaboration, he then moved in October 2004, in a new, independent workshop in Cremona.

This new workshop is situated in the very heart of Cremona and is an interesting meeting place for professional performers, violinmakers and connoisseurs.

Edgar´s increasing reputation on craftsmanship and remarkable acoustic qualities has boast the high demand among private collectors and musicians from all over the world including Australia, Austria, Canada, England, France, Germany, Holland, Japan, Korea, Norway, Switzerland, United States and of course Italy.

Edgar Russ is member of: the Consortium of Violinmakers “Antonio Stradivari” Cremona, Associazione Liutai Italiani (ALI) and of the Violin Society of America (VSA).