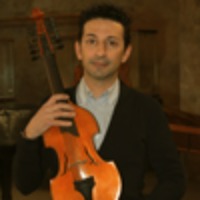 Angelo Sperzaga was born in Cremona in 1968. After the basic studies, he attended the International School of Violinmaking, where he graduates in the 1986 under the guide of Masters Massimo Negroni and Ezio Scarpini.

In the following three years he works in Giorgio and Daniele Scolari’s workshop where he improves his own craftsmanship and his own personal style in the construction with new methods; he acquires experience in the restoration of all the instruments of the classical quartet.

In 1990 he opens his activity and his workshop where he mainly devotes himself to the construction of new instruments, always using material of good quality and of decennial seasoning, inspiring himself to the tradition of the classical Cremonese models such as Bergonzi, Stradivari, Guarneri , Amati , Ornati, Fagnola, Oddone, etc.

In the same period he collaborates with his Master Massimo Negroni on the study and the search of different types of varnishes both with alcohol either with oil always experimenting new recipes and new ingredients.

In 1993 he wins the silver plate offered by the A.L.I. (Italian Violin Association) in Baveno; in 1997 he got the seventh place with his Cello at the Triennale in Cremona; in 1994 he enters the first ten finalists at the V.S.A. Competition in Oakland (U.S.A.) with a violin and in the 1996 in Albuquerque, New Mexico, he wins 2 Certificates of Merit for the good job in the section Cello and in the section Quartet.

Currently he works in his violin-shop in Cremona behind the central square of the Cathedral, destination of musicians and collectors coming from the whole world.

From 1998 he is a teacher of Laboratory and Varnishing in the International School of Violinmaking in Cremona. Today his production is characterized by instruments with models inspired to the Italian Maker of the 19th century and half of 20th’s; also building copies of important maker of the ‘700 such as Guarneri del Gesù, Domenico Montagnana, Gasparo da Salò, Giovanni Paolo Maggini ,etc.

Every instrument is made with maple and red spruce of extra quality and decennial natural seasoning, painted with varnishes with alcohol and oil, in modern style and antique look style. Currently he is working on a project of acoustics study applied to the strings instruments in collaboration with the International School of Violinmaking in Cremona.