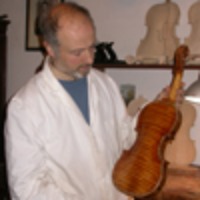 Marcello Villa was born in Monza in 1965, and lives and works in Cremona. He began studying violin when he was twelve, later enrolling in the International School of Violin-making in Cremona.

He graduated in 1983 obtaining the highest possible merit in his final year, a scholarship from the Walter Stauffer Foundation. Eventually, Marcello Villa was awarded the following prizes:

– Silver medal at the 6th Violinmaking Triennal Competition in Cremona (1991)

– Two Gold medals for violin and cello in the Bagnacavallo Exposition (1992).

In these places he won the following prizes:

In 2011 he won the Gold medal A.N.L.A.I. at the V° National Violinmaking Competition in Pisogne (BS).

In 2013 he won a Gold medal with a violin and the Prize for the best acustic quality with a viola at the VII National Violinmaking Competition A.N.L.A.I. in Mozzate (Co).

Marcello Villa makes violins, violas and cellos, particularly favouring Cremonese classical models: Stradivari, Guarneri “del Gesù”, Amati. His main interest, however, which began to emerge during the first formative years of his career, is the reproduction of Stradivarian inlaid instruments, which he believes to be the quintessence of artistic and technical perfection.

From 1983, the year in which he built his first inlaid violin, preserved in the Museum of the International School of Violin-making in Cremona, and until the present day, he has made copies of the Hellier, Ole Bull, Sunrise, Cipriani Potter, Rode, Greffhule violins and of the Spanish and Axelrod violas.