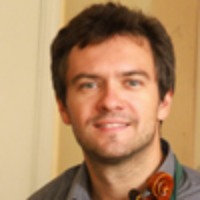 Adriano Spadoni was born in Moscow (Russia) on October 26th, 1978. At the age of 9 he made his first approach to music when he attended a cello course under the supervision of Pavlutskaja Natalija, who is now a teacher at Trinity College of Music in London.

During the course, which lasted 7 years, he studied music theory, musical culture and the piano.

In 1993, at the end of his secondary school studies, he enrolled with the Institute of Restorers and Engravers of Wooden Works in Moscow, where he learned decorative techniques for works in wood and developed his bent for the construction of stringed instruments. He graduated with honors in 1996.

In September 1996 he moved to Cremona, native city of world-wide violinmaking, in order to learn the ancient art of making stringed instruments, and started to attend the prestigious school of violinmaking, the I.P.I.I.A.L. Antonio Stradivari. In June 1999 he obtained his diploma as a violin maker, under the supervision of Master Giorgio Cè, one of the most successful violinmakers in Cremona (winner of the 1976 First Triennial competition of Cremona, in the violin division). He also had as teachers: M. Tadioli, M. Negroni, P. Pistoni, H. Lois., A. Voltini, C. Amighetti, T. Matsushita, E. Slaviero for the restoration and the construction of strings.

In September of the same year, he started training in the workshop of Katharina Abbhul and Alessandro Krilovi, where he learned new techniques of construction and painting of stringed instruments, with the strong influence of the classical traditions of Cremona violin making. This radically changed his perspective of violinmaking, and modified his way of working.

At the same time, in September 1999, he decided to enter the Faculty of Musicology of the University of Pavia, attending the detached department in Cremona, where he developed his knowledge of the history of music and lute-making and increased his theoretical musical training.

Over the next 5 years Adriano dedicated himself to these university studies, passing most of the exams with good marks, and to his own work on the construction of stringed instruments, especially violins. He associated with and co-operated with several workshops in Cremona until September 2004, when he started working in the lab of Edgar Russ, one of the most important in Cremona.

In this workshop he largely dedicated himself to painting, assembly and adjustment of instruments, giving the utmost attention to this production stage, while devoting himself to improving the acoustic level of his instruments.

In June 2006 Adriano took part in the 2nd edition of the Event “CREMONA-KREMLINO”, with his copy of the famous “Lord Wilton 1742” of Guarneri del Gesù.

In October 2006 he participated in the 11th International Triennial Competition of Stringed Instruments, in the category of violas, obtaining 16th place out of 83 competitors. His instrument was highly appreciated, especially for its sound level, collecting most of the votes of the jury.

In June 2007 he took part in the 5th Tchaikovskii Competition in Moscow, in the category of violins, making an instrument in the style of the “Betts 1704” by A. Stradivari. He obtained good results and took 2nd place.